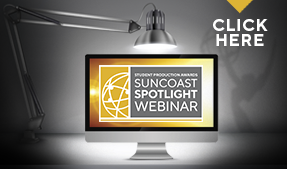 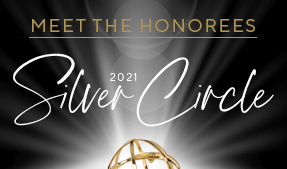 The Suncoast Chapter of the National Academy of Television Arts & Sciences is pleased to announce the 2021 Silver Circle honorees. The annual recognition is given to individuals who have worked with distinction in the television industry within the Suncoast Region, which includes the State of Florida, the State of Louisiana, the Mobile, Alabama-Pensacola, Florida television markets, as well as Puerto Rico. Six of this year’s honorees are from the Miami, Fort Lauderdale, Jacksonville, and Tallahassee markets and three are from Puerto Rico. This year’s virtual ceremony will take place on Sunday, May 16 at 5 PM, EDT. Read more.

It’s fast, friendly, flexible, and revolutionizing how we tell stories on the go.

Mike Castellucci creates broadcast ﬁrsts airing half-hour specials shot entirely on his iPhone called Phoning It In in the ﬁfth largest TV market in the country. He’s been described as disrupting an industry as his pieces air in TV markets coast to coast. He started entering his work in regular TV award competitions without mentioning that he’s shooting only with his phone, and he’s winning. From Emmys® to Edward R. Murrow awards to three Best of Festival national awards from the Broadcast Educators Association, and a Best of the Best National award. He’s playing on their ﬁelds. TEGNA, a group that owns 47 television stations handed him their Innovative Storytelling Award.

In 7 years, Mike has honed the craft, being called a pioneer in “phonography.” Innovation doesn’t necessarily mean something will be widely accepted. Innovation can be seen as a fad or a gimmick. His work breaks the mold of traditional journalism and so demands a new way of thinking.

What’s a little harder to quantify but undeniable is the impact Mike’s work has had on our industry. He has shattered the glass ceiling of storytelling with a phone. An entire 150 station group has sent each of its stations iPhone kits. A top tier research institution in the Big Ten hired Mike to teach the next generation of a storyteller who isn’t intimidated by using a phone. His storytelling with phones course is now part of the accredited journalism major at Michigan State University.

The seasoned reporter has covered literally all topics reaching headlines from cultural affairs to major political and natural disasters.

She speaks to health officials and scientists weekly on the Covid-19 Update program at WIPR and has another weekly intervention on health issues for the digital health magazine “Revista de Medicina y Salud Pública”. After hurricane María took most broadcast media off the air she embraced mobile journalism to report the disaster to audiences abroad on social media. Some of the stories and interviews went viral reaching millions. Now she provides mobile content for various news outlets.

She began her career at Channel 13 in San Juan and later moved on to radio where she covered various positions in the newsroom, from News Director to Producer and Assignment editor.

Her work includes various award winning pieces, among them the NATAS Suncoast Regional Emmy® award as writer for “Haiti: En la Vorágine del Caos” and 2 other regional Emmy® nominations. Her work has received recognition from the NAHJ, the Puerto Rico Journalist Association, the Overseas Press Club and numerous private and non public entities. She has covered elections abroad, disasters in neighboring countries and political beats. In 2019 she obtained a journalism fellowship from the Gerontological Society of America and a National Press Foundation Fellow on Dementia 2019. She is also former Overseas Press Club President and member of the National Association of Hispanic Journalists.

She grew up in Philly and moved back to San Juan where she lives with her family.

Edward Julbe joined the School of Communication in the spring of 2008. He teaches courses in mobile journalism, television production, and broadcasting and serves as the faculty advisor to the award-winning, student-produced weekly sports show, SportsDesk.

Julbe has more than a decade of experience in the television and video production industry. Most recently, Julbe spent five years as the Senior Videographer / Editor for Miami-Dade Fire Rescue, the fifth-largest department in the nation, receiving a regional  Emmy® nomination and a Telly Award for his productions. During that time, he also served as an adjunct professor of television production at Barry University and Florida International University.

Julbe received an M.A. in Communication from Barry University and a B.S. in Television Production from Florida International University. A Miami native, Julbe currently resides with his wife Natalie and their two children, Sharda and Luke.