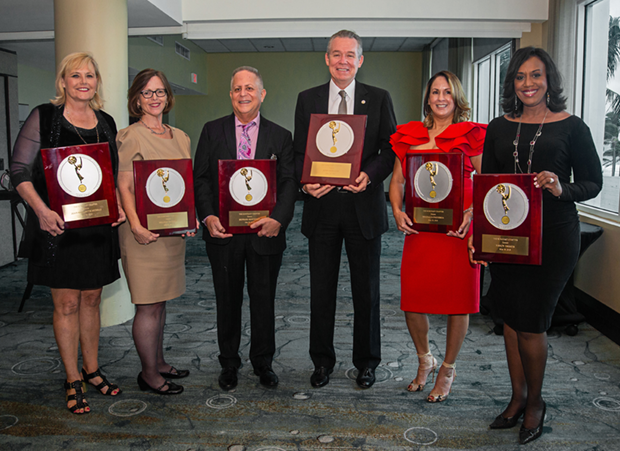 Howard Bernstein is a Senior Producer at the CBS Owned and Operated Television Station in Miami. Howard has worked at the station for 28 years. Howard has produced the station’s annual hurricane specials since 2013, winning a Suncoast Regional Emmy® for “Hurricane 2014: Survive the Season”.

When not working, Howard concentrates on his passion to see the world. He has traveled extensively on four continents with a goal of getting his passport stamped in the remaining three. Howard is a native of New York City. He graduated with a Bachelor of Arts degree in

Communications from the University of Miami, and a Master of Arts degree in Journalism from the University of Missouri-Columbia School of Journalism. Prior to working at CBS4 in Miami, Howard was Managing Editor at WRAL-TV in Raleigh, North Carolina, producer at WDAF-TV in Kansas City, Missouri, producer at WMAR-TV in Baltimore, Maryland, and Executive Producer at KOMU-TV in Columbia, Missouri.

Migdalia Figueroa is the Vice President of News at NBC 6 South Florida, the NBC-owned station serving the Miami/Fort Lauderdale market. Figueroa has over 25 years of experience in the industry. Since arriving at NBC 6 in April 2012, she has relaunched the station’s news brand and mission and redefined editorial and production styles.

Prior to joining NBC 6, she was Senior Vice President of Content and Brand for the Telemundo Station Group. In that role she had oversight of local branding at all stations as well as of the local newscasts performance. Figueroa joined Telemundo in January 2005 as Vice President of News for the Miami station.

A winner of five individual and one station Suncoast Regional Emmy award, Figueroa began her broadcast journalism career as a news producer in her native Puerto Rico. In 1990, she moved to New York City where she joined the Univision station. Two years later, she moved to Miami to produce Univision Network News, weekend edition. She also served as Executive Producer of WLTV’s newscasts, Executive Producer for Univision Online, and General Producer of “El Show de Cristina” before joining Telemundo.

Figueroa graduated from the University of Puerto Rico with a degree in Communications.  She resides in Pembroke Pines, Florida, with her family.

Melissa Harmon, Emmy Award-winning television producer with over two decades of national and local news experience, serves as South Florida PBS’ Director of Production. In this role, the former show runner for PBS’ Nightly Business Report focuses on content creation, mentoring producers, working with shooters and editors to create the perfect look for a program and shaping special projects like the recent interactive town hall broadcast, Parkland: The Way Forward.

Melissa spent 18 years with Nightly Business Report. Seven of those years were in the hot seat as senior producer and show runner during a time that saw the launch of the iPhone, the housing market’s boom and bust, the financial crisis and the Great Recession.

After NBR, Melissa was recruited by tech CEO Jason Kates to help launch a digital media platform that included live streaming and the ability for users to shoot, edit and post professional quality videos straight from their phones.

Melissa’s love of storytelling brought her back to public media.  She joined the newly merged South Florida PBS as Supervising Producer in 2015, overseeing a talented team of creatives.  In December of 2016, she was promoted to Director of Production and tasked with creating a new signature public affairs program for the station group. In January of 2017, Your South Florida debuted.

Melissa is a native Floridian. She graduated from Florida International University, majoring in Broadcast Journalism. She has produced several award-winning NBR special editions including: Kids & Money, Mint Condition: Investing in Collectibles, and Square One: Building Your Financial Future. In 2000, Melissa was awarded a National Press Foundation Fellowship to attend the prestigious Wharton Seminars for Business Journalists. In 2004, NBR brought home a National Emmy for the program’s ongoing coverage of China As An Emerging Economy. Melissa also won a Suncoast Regional Emmy for producing in 2017, with the Changing Seas episode Toxic Algae, Complex Sources and Solutions.

John Morales, Chief Meteorologist for WTVJ NBC 6, is now the longest tenured broadcast meteorologist in South Florida. His tropical weather acumen and steadfast character guided local viewers through hurricanes Andrew, Irene, Katrina, Wilma, and most recently Hurricane Irma. For his life-saving work during the 2017 season, Morales was recognized with the John Coleman Broadcast Award at the National Tropical Weather Conference.

John was raised in Puerto Rico and later returned to his birthplace in Upstate New York to attend the atmospheric sciences program at Cornell University. In college, he won the student weather forecasting contest, rowed for the Cornell Crew, and later worked as a disc jockey and sportscaster for student-run radio station WVBR. His professional career began as a civil servant with the U.S. National Weather Service, where he was a Lead Forecaster before becoming the Chief of the South American Desk at the National Center for Environmental Predictions in Washington D.C.

John is one of very few broadcast meteorologists elected to be a Fellow of the American Meteorological Society (AMS). Among his credentials, John holds the AMS and National Weather Association (NWA) Seal of Approval, and has won the Broadcaster of the Year Award from both organizations. In addition, he is accredited by the AMS as a Certified Broadcast and Certified Consulting Meteorologist. He has won three Suncoast Regional Emmy Awards, one at each station he has worked in.

Morales’ volunteerism extends from board of directors’ participation in multiple South Florida non-profits, to mentoring young scientists, to serving on National Academy of Sciences committees.

She began her journalism career writing for the college newspaper. Joan still remembers the thrill of seeing classmates reading her front-page stories as they rode the buses between campuses. Joan also worked at the college radio station, writing copy and anchoring newscasts.

That led to a coveted internship at CBS in New York, running down leads for the assignment desk, setting up stories and tagging along with reporters in the field. Joan knew broadcast news was her calling after watching 60 Minutes legends Mike Wallace and Andy Rooney strategizing in the commissary.

She started her TV career in upstate Pennsylvania, where she won an AP award for feature reporting and a prestigious National Press Club Award for her investigative series on water quality. Sub-zero live shots in the dead of winter prompted her to head south. She became the weekend anchor at the NBC affiliate in Raleigh, North Carolina. Later, Joan joined the CONUS Network, a competitor to CNN, where she covered some of the biggest stories of the era, from Amtrak’s deadliest train wreck, to Hurricane Andrew, and the trial of Panamanian dictator Manuel Noriega.

In 1995, she joined WPBF, the ABC affiliate in West Palm Beach as anchor and reporter. The highlight of her time there was in 2000, when she covered the notorious “hanging chads” presidential election controversy.

In 2001, she made the leap to CBS4. She was the first to report on the South Florida lives of the 9/11 terrorists leading up to the attack.

Proving once again what Joan loves most about reporting in South Florida – it truly is the greatest, craziest, news market in the world.

Nancy Parker is a five-time Emmy Award-winning journalist who has spent almost 30 years covering news in South Louisiana. She was presented with the Regional Silver Circle Award at this year’s luncheon. She has anchored every prime-time newscast at WVUE FOX 8 during her twenty-two-year tenure in New Orleans. She currently anchors the FOX 8 Morning Edition.

The Opelika, Alabama native graduated with honors in 1988 from the University of Alabama in Tuscaloosa, Alabama with a Bachelor of Arts Degree in Journalism.

Her first TV news job was as Alabama Bureau reporter for WTVM Channel 9 in Columbus, Georgia in 1989 as a one-man band. Her next stop was WSFA News 12 in Montgomery, Alabama. When a 5 o’clock anchor position opened at WAFB in Baton Rouge, she auditioned. She anchored the number one 5 o’clock broadcast in the city of Baton Rouge for six years.

Nancy moved to New Orleans in 1996 as weekend anchor at WVUE.  She began anchoring 10 p.m. weeknight broadcasts with co-anchor John Snell in 1999. The two anchored all the weekday evening broadcasts for more than a decade.

She covered Pope Paul II’s visit to Saint Louis and the Canonization of Saint Katherine Drexel in Rome. In 2006, she was invited to the White House for a one-on-one interview with President George W. Bush on the Hurricane Katrina Recovery. She’s earned five regional Edward R. Murrow Awards, a Telly award, and several first-place Associated Press and Press Club awards over the years.

Nancy’s proudest accomplishments are her children, 13-year-old twins Piper and Pierce and her 17-year-old son Parker. She met her husband of twenty-three years, Glen Boyd, on a story in 1989. The longtime newsman is now a public information officer for the Jefferson Parish Sheriff’s Office. Nancy has served on the Boards of Big Brothers Big Sisters, Dress for Success, and is now on the advisory board of the Cool Cooperative. She is a more than 30-year member of Delta Sigma Theta Sorority Inc.