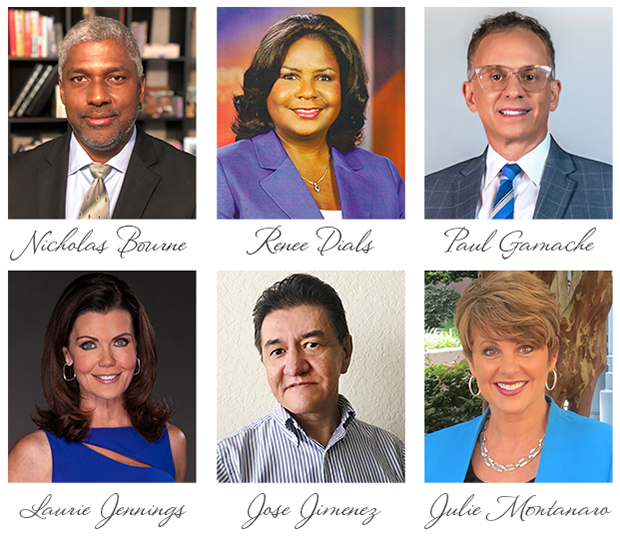 The Suncoast Chapter of The National Academy of Television Arts & Sciences is proud to announce the 2020 Silver Circle honorees. The annual recognition is given to individuals who have worked with distinction in the television industry within the Suncoast Region, which includes the State of Florida, the State of Louisiana, the Mobile, Alabama-Pensacola, Florida television markets as well as Puerto Rico. This year’s honorees are from the Miami-Fort Lauderdale, Orlando, Mobile and Tallahassee markets.

Nicholas “Nick” Bourne grew up on the beautiful island of Barbados. He graduated from the University of Texas at Arlington with a degree in Mass Communications and Television Production. After graduation, he moved to South Florida where he landed his first TV job as a Production Assistant at WPLG in 1993.

With the goal of becoming a Photojournalist, he shadowed the CH10 photographers on his days off.  Soon he put this first demo reel together and landed his first News Photographer job at WBBH in Fort Myers in 1994.

In 1995, WPTV was his next stop. Within 6 months, Nick was promoted to his first managerial position as Chief Photographer.

In 1998, Nicholas returned to WPLG, where it all began.

In 2003, Nick moved to Dallas/Fort Worth to become the News Operations Manager at KTVT, CBS 11. Four and a half years later, he returned to South Florida as the Assistant News Director at WFOR.

From Southwest Florida to the Treasure Coast, Broward County to Miami Dade, Nick has covered it all. Along the way, he learned, experienced and shared with some of the best journalists in the business. In the last three decades, he has covered some of the most important stories to impact South Florida such as: The Crash of Value Jet; the 911 attacks; the death of Fidel Castro; the historic visit to Cuba by two Popes and a United States President. He also coordinated and managed coverage of numerous hurricanes, local and national gubernatorial and presidential debates, two Super Bowls and three NBA championships.

He is currently the Senior Coordinating Producer/Senior Director at CBS Sports HQ in Fort Lauderdale, which is the National headquarters of the CBS Sports Digital division. There he leads a team of 60 responsible for covering national and international sports from the NFL to World Cup Soccer.

Nicholas, his wife and three children, reside in Lake Worth.

Renee Dials grew up in Detroit and majored in journalism at Wayne State University, graduating in 1975. She came to WALA in 1977.

Renee was the first African-American, female TV anchor in Mobile, Alabama. Her 40 years of experience earned her both respect and recognition, both valuable assets in her news gathering and reporting.

She’s worked with some wonderful news people over the years. She has reported on everyone from Hank Aaron to President Obama, and worked with everything from typewriters to smart phones. She’s won awards including two Abby Awards from the Alabama Broadcaster’s Association – one for her investigative report on constables, and another on an alleged school cheating scandal.

Renee tells Fox 10, “What we do affects other people and potentially influences just as I am influenced by people sometimes that I didn’t even know. So we have to be aware of that and it’s a responsibility, but it’s not one that is burdensome. I appreciate the fact that people look up to me and perhaps young people want to follow in my example. So I just try to set a good one.”

Renee is the mother of 3 adult children. She also has 7 grandchildren. But Renee also has others who love her, because after watching her for decades, they can see her heart.

Paul Gamache was born and raised in San Juan, Puerto Rico and moved to Florida to pursue a degree in Communications, Radio/TV, graduating with a bachelor’s degree rom the University of Central Florida in Orlando.

Right after college, he landed a job with the local CBS affiliate, WCPX (now WKMG), where he worked as a production technician until 1986. That year he was hired as part-time news producer/writer/anchor, for WONQ, the first Spanish language radio station licensed to the city of Orlando.

In 2001 he became co-anchor for the first Spanish language television newscast in the market: Noticias 26, which was launched by the local Univision affiliate. Paul has continued to anchor both highly rated newscasts coming up on 20 years this next April – and for the past 4 years has also been producing and anhoring the late show. His passion for the craft, extensive knowledge of his native language, outstanding writing skills, simultaneous interpretation abilities, and ad-libbing skills have proven invaluable in his career, earning him the respect not only from the community he serves on a daily basis but also from his peers.

Paul has been recognized by local awards such as Premio Paoli and the International Association of Poets and Writers award – Pluma de Oro, amongst others. He won his first Emmy award in 2018 in the Informational/Instructional category, and has been nominated in 2013, 2014, 2015 and 2019.

Paul Gamache is a truly high caliber news professional and mentor for many young Latino journalists and interns that have had the privilege of working in the same newsroom with him.

There is no doubt that when you speak of excellence and credibility in Spanish language news in the Central Florida market, there is one name that stands out: Paul Gamache – Senior News Anchor for Noticias Univision Orlando.

Laurie Jennings is a 6-time Emmy award-winning TV news reporter and anchor who has made her mark on South Florida.

For 15 years, Laurie led WPLG’s highly rated weeknight newscasts – reporting live from major world events including the 1st U.S. Tour of Pope Francis, the passing of Nelson Mandela in South Africa and the earthquake in Haiti.

Laurie has been deeply involved in the South Florida community since 1998 through United Way, Voices for Children, Holtz Children’s Hospital and Chapman Partnership for the Homeless. After giving birth to extremely premature twins in 2006, Laurie became a spokesperson for the March of Dimes.

Laurie graduated from Cornell University with high honors in government. She earned her master’s from Northwestern University’s Medill School of Journalism.

Laurie’s TV news career started in 1990 in Youngstown, Ohio at WKBN (CBS) and then in Cleveland at WJW (CBS) – earning her first regional Emmy awards reporting from Mexico and Armenia.

By 1997, Laurie was Boston’s morning anchor at WHDH (NBC) and reported live from Northern Ireland. That reporting led her to the evening anchor desk in Miami.

Five years leading WSVN (FOX) launched Laurie to the network level and MSNBC in 2003. She hosted 2-4 hours of breaking news daily, served as substitute anchor on “CNBC with Brian Williams” and “The Lester Holt Show”, and presented the news on “Weekend Today”.

WPLG drew her back in 2004 to become their main anchor.

Laurie and her husband are busy raising their 14-year-old twin boys, Luke and Jake. Laurie has launched her own media business “Laurie Jennings LIVE” as she continues to be a face and voice representing the best of South Florida.

Jose Jimenez loves technology and is highly skilled at troubleshooting everything from broken equipment to malfunctioning edit systems. He began his career in broadcast engineering after completing his training as an Electronic Engineer at the Universidad Distrital Francisco Jose de Caldas in Bogota Colombia. Prior to moving to the United States he worked at the National Institute of Radio and TV in Bogota.

In 1989 he joined the staff at WPBT2 in Miami as a Maintenance Engineer and later he was promoted to Supervisor of Technical Maintenance.

Jose implemented the transition from bulky tape to tape editing machines to the first computerized editing systems hardware that required constant attention. He continues to provide technical (and moral) support to the station’s editors and is currently building brand new 4k edit systems, using an entirely software-based workflow. His technical skills and expertise support all of the station’s local productions, including Star Gazer, CheckPlease! South Florida, Your South Florida, KidVision, and Changing Seas. In addition, Jose helped implement the station’s transition from SD to HD broadcasts, which involved building a new master control from scratch and updating the station’s transmitter.

All these industry changes have come with their own technical challenges and growing pains, and Jose has been right there in the trenches, making it his mission to troubleshoot any issues as they arise – not an easy feat when faced with the constant pressures of broadcast deadlines!

Jose takes pride in his work and is considered the go-to-guy at the station to troubleshoot any technical issues that may arise. Without his know-how and hard work behind the scenes, many of the station’s programs may not have made it on air. We can’t think of anyone more deserving for this award honoring 25+ years of dedicated service in the Suncoast Region’s broadcasting industry.

Julie Montanaro has one of the most recognizable smiles in Tallahassee.

She’s been anchoring and reporting at WCTV for 30 years and has covered everything from contentious elections to high-profile trials to devastating hurricanes.

Julie recently served on the board of Florida’s Associated Press and has won numerous AP Awards, including the distinguished “Individual Achievement Award” three times.

Julie is the driving force behind PBJ PLZ – a WCTV drive with Leon County Schools and Second Harvest that collects tons of peanut butter and jelly for hungry kids. The National Association of Broadcasters Leadership Foundation recognized her with its Service to America Award for it in 2018.

Julie serves on the United Way of the Big Bend’s board of directors and chaired its 2016 community campaign. She is a longtime volunteer with the Christmas Connection and helps many other charities with fundraising and events throughout the year.

Julie graduated from Syracuse University with a degree in Broadcast Journalism.

She enjoys music, writing, traveling and spending time in the great outdoors. Most of all, Julie enjoys spending time with her two favorite people, her husband Zack and daughter Natalie.