The Silver Circle is presented to distinguished individuals who have contributed a quarter of a century or more of exemplary excellence to the television industry. This year’s honorees were Lois Thome, Larry Olevitch, Sandra Peebles, Craig Setzer, Jorge H. Carballo and David Choate, all of whom have devoted a quarter of a century or more to the television industry, a significant part of which was done in South Florida.

The 29th Annual Suncoast Silver Circle Honorees were inducted on Sunday, April 29, 2017 during an afternoon reception and luncheon at the Westin Beach Resort & Spa in Fort Lauderdale. 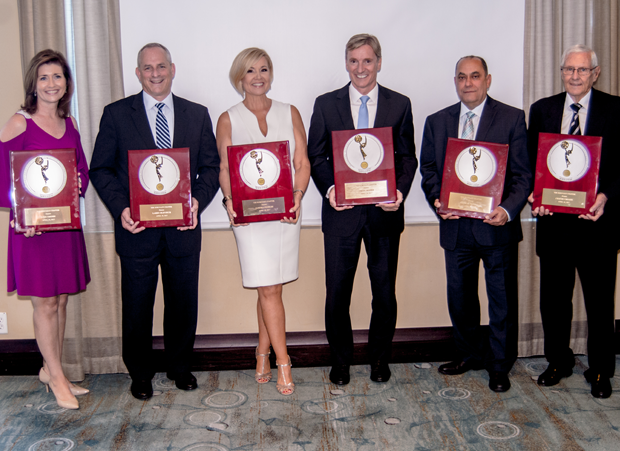 Jorge H. Carballo – Telemundo 51/WSCV
Jorge H. Carballo is the President and General Manager of Telemundo 51/WSCV, the NBCUniversal-owned television station that serves Spanish-speaking viewers in the Miami-Fort Lauderdale market. Carballo is responsible for the overall management of the station’s broadcast news, sales, marketing and digital operations. He has worked in the South Florida television industry for more than 30 years, including 24 years at Telemundo 51. Before assuming his current role in 2012, Carballo was Vice President, General Sales Manager for the station. Under Carballo’s leadership, WSCV has experienced unprecedented ratings wins in the market across various dayparts in key demographic groups, regardless of language. The station has also been recognized with various industry awards for journalistic excellence. Telemundo 51’s 2014 production of Florida’s only Spanish-language gubernatorial debate earned Carballo an Emmy® for “Outstanding Achievement for Politics/Government.” In 2016 Carballo was also awarded the Emmy® for “Outstanding Achievement for Overall Excellence.”

David Choate – Retired Television Broadcaster
David Choate began his illustrious career in television news in 1959 when hired by WTVJ’s legendary Ralph Renick as a Newsfilm Reporter after graduating from Northwestern University with a Master’s Degree in Journalism. Within a year, he was producing the 11 o’clock Newscast and in 1961 left for WCKT/WSVN to produce that station’s 11 o’clock news. Over the next 18 years, he rose through the ranks of Assignment Editor, 6 P.M. Producer, Assistant News Director and Executive News Producer. In 1979, he was hired by the NBC network to become its first Miami Bureau Chief. He was lured back to WCKT/WSVN as its News Director, a position he held for the next 8 years. During his tenure, the station increased its daily news coverage an additional 90 minutes including a new program, “Live at Five”. He left WSVN and television news in 1987 and became the “founding” Executive Director of the Broward Commission on Substance Abuse, an Anti-Drug Coalition that is part of the United Way of Broward County. In 2010, David was given Lifetime Achievement Awards in Substance Abuse Prevention from both the State of Florida and Broward County.

Larry Olevitch – NBC6 South Florida/WTVJ
Larry Olevitch is the President and General Manager of NBC6 South Florida/WTVJ, the NBC-owned station serving the Miami-Fort Lauderdale market. Olevitch has over 30 years of local broadcast television experience, including over a decade at NBCUniversal. Before assuming his role at NBC6, Olevitch was the Senior Vice President of Integrated Media at the NBC Owned Television Stations for four years, where he created a new team dedicated to the sales function of all non-broadcast businesses. Previously, he was the Vice President of Sales at NBC6. In that role, he focused on creating new business initiatives for the station, developing analytical disciplines and improvements in digital sales performances. Olevitch is currently on the Board of Directors of The YMCA of South Florida, Big Brothers Big Sisters of Miami and is Vice-Chairman of The American Heart Association’s Broward Heart Walk.

Sandra Peebles – Univision 23
Sandra Peebles is a bilingual journalist working as a Spanish language News Anchor/Reporter for Univision 23 in Miami. She is a dynamic, versatile reporter who has excelled at storytelling in a wide range of subjects. Peebles has earned 10 Emmy® awards ranging from Societal Concerns, Politics, Features and Public Affairs Reporting. Sandra is passionate about serving her community. Since 2002 she has been involved with the Leukemia and Lymphoma Society’s Team in Training program, having run 5 half marathons and one 26.2 mile race to raise funds and awareness to fight cancer. She is invested in the effort to find a cause and cure for autism—having become a regular presenter at Autism Speaks events. Sandra is a founding board member of Kakes 4 Kids, an organization that celebrates birthday parties for children in foster care with the message that their life matters.

Craig Setzer – WFOR/CBS4
Craig Setzer is the Chief Meteorologist at the CBS Owned and Operated affiliate in Miami. Craig has worked at the station for over 17 years and won an Emmy® in 2014 for his production of the station’s annual hurricane special. Besides his work on TV, Craig stays busy and active in the meteorological community teaching weather forecasting classes with the National Weather Service, the National Hurricane Center, and at the University of Miami’s Rosenstiel school. Craig is involved in many other projects which include the Miami Marlin’s Weather Day, Boys & Girls Club of Broward County and the Dolphin’s Cancer Challenge where Craig cycled 100 miles two years in a row to raise money fighting cancer. Craig attended the University of Oklahoma where he learned the fine art of storm chasing and since his days in college, he’s seen nearly six dozen tornadoes.

Lois Thome – WINK-TV
Lois Thome co-anchors WINK News at 5, 6 and 7. Lois joined WINK-TV in 1992 (right before Hurricane Andrew!) and has garnered many awards and recognition including: The Best News Anchor in Southwest Florida, the Phi Delta Kappa Lay Person of the Year, the Quill Pen Award from the Florida Association of School Administrators, was named a Woman in History from the American Business Women’s Association, the Library Advocate of the Year by the Southwest Florida Library Network and was voted one of the top Women of the Year by Gulf Shore Life Magazine. At WINK, Lois has lead the “WINK News Feeds Families Hunger Walk” every year since its inception in 2009, raising (literally) millions of dollars to feed hungry families in our area. For 15 years she has volunteered her time as a committee member for the Southwest Florida Reading Festival, sits on the board of Gulf Coast High School’s Sports and Entertainment Marketing Academy, served on the board for the National Center for Missing and Exploited Children in Southwest Florida … and volunteers in area schools reading to children and mentoring students.