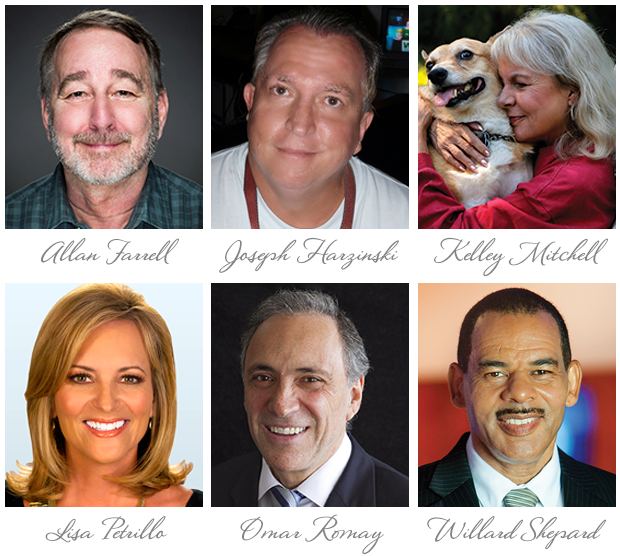 The Silver Circle is presented to distinguished individuals who have contributed a quarter of a century or more of exemplary excellence to the television industry. This year’s honorees were Allan Farrell, Joseph Harzinski, Kelley Mitchell, Lisa Petrillo, Omar Romay and Willard Shepard, all of whom have devoted a quarter of a century or more to the television industry, a significant part of which was done in South Florida.

The 28th Annual Suncoast Silver Circle Honorees were inducted on Sunday, April 17, 2016 during an afternoon reception and luncheon at the Westin Beach Resort & Spa in Fort Lauderdale. This was the 28th consecutive year that the Silver Circle has been given in South Florida.

Allan Farrell – Freelancer
Allan began his career as a production assistant with WPBT in 1979. He progressed to associate producer and then to cinematographer when a position opened. Over the years, Allan has worked on numerous special projects, including the documentary series “Common Ground”, nationally broadcast “Décor” and “Lady of the Glades”. As an adjunct instructor at Palm Beach State College, he taught editing and post production for more than 15 years. Currently, Allan is a full-time freelancer, both shooting and editing for ITV, whose programs are distributed worldwide.

Joseph Harzinski – WTVJ NBC 6
Joe started his broadcast career as an intern in the sports department at WTVJ. He continued to intern at WTVJ for four years while attending Florida International University. After graduating in 1978, he was hired as a full-time photographer at WTVJ. From hurricanes and drug wars of the 1980’s to Muhammad Ali training before the last fight of his career – Joe has covered the best and worst of times in South Florida. He has had the privilege to work with the likes of Tony Segreto, Ike Seamans, Al Sunshine, David Bloom, Ralph Renick and Katie Couric to name a few. Joe is proud of his career and the many years he has spent at WTVJ uncovering Miami’s past history and the present.

Kelley Mitchell – Posthumous Award
For several years, Kelley Mitchell was a mainstay in South Florida television. In fact, the bulk of her 30-plus year career was spent here. She joined WSVN in 1991 as a general assignment reporter and weekend anchor. By January 1994, management named her primary co-anchor alongside Rick Sanchez. She remained at WSVN until 1998, when she joined WPLG and served in a number of capacities: reporting and on occasion, anchoring there as well. She later moved on to radio, captivating audiences at WLRN. Virtually from the start, and right up until the time she passed away last year, Kelley was unquestionably dedicated to her craft — and to the new generation of broadcast journalists who followed in her footsteps. Kelley cared deeply about the work of our industry and the people who are privileged to be a part of it. Her legacy lives on in many of them.

Lisa Petrillo – WFOR CBS4
Lisa Petrillo is the Entertainment and Lifestyle Reporter for WFOR, CBS4. Throughout her years as South Florida’s premiere Entertainment Reporter, Lisa has interviewed many celebrities, among them Paul McCartney, Sting, Tom Cruise, Oprah Winfrey, Jennifer Lopez, Arnold Schwarzenegger, Elton John, Tom Hanks, Warren Beatty and the late Audrey Hepburn. In addition to reporting on entertainment, Lisa hosts the CBS4 “Taste of the Town” segment celebrating South Florida’s growing culinary scene and reports on fashion, travel and other lifestyle trends. Lisa’s professional career began in 1986 as Communications Manager for the Greater Miami Convention and Visitors Bureau. That year, she began her television career at WPLG as a producer. She was named the station’s entertainment reporter in 1988. Following WPLG, Lisa became a national correspondent on the NBC show “Real Life”. She joined WFOR, CBS4 in 2001 as Entertainment and Lifestyle Reporter.

Omar Romay – America TeVe
As the founder and CEO of America TeVe, Omar has created over 40 hours a week of competitive, live, original programming; more than 30,000 hours in total! For the last 18 years, Omar has worked day in and day out, to make America TeVe the successful company it has become, growing it from 20 to over 300 employees, and reaching audience levels that no one ever imagined. America TeVe’s success has served as a model for many other companies that have copied it’s formula, resulting in more competition, more people employed, and a better quality of local programming for Hispanics in South Florida. Motivated by Omar’s passion and strive for excellence, America TeVe’s programs and employees have won a total of 100 Suncoast Emmy® Awards as well as other industry recognitions.

Willard Shepard – WTVJ NBC 6
Willard Shepard is a four-time Emmy® award winning journalist, attorney and Gulf War fighter pilot. Willard has brought his unique insight to NBC 6 viewers as an anchor and investigative reporter for more than 20 years. He came to WTVJ in 1994 from CBS affiliate WJW-TV in Cleveland, Ohio, where he anchored the morning news and was a special projects reporter where he received an Emmy® Award for his news series “The State of Black Cleveland.” He has also been honored for his reporting by the Associated Press, United Press International and the Aviation and Space Writers Association. Shepard, a member of the Florida Bar, uses his legal skills to develop consumer investigations that uncover fraud in private business and government. He is a graduate of the Florida International University College of Law and specializes in media and aviation legal issues. Shepard graduated cum laude from Temple University in Philadelphia, Pennsylvania with a Bachelor’s Degree in Communications and Theater.