Pembroke Pines, FL (April 2022) – The Suncoast Chapter of the National Academy of Television Arts & Sciences is pleased to announce the 2022 Silver Circle honorees.  The annual recognition is given to individuals who have worked with distinction in the television industry within the Suncoast Region, which includes the State of Florida, the State of Louisiana, the Mobile, Alabama-Pensacola, Florida television markets, as well as Puerto Rico. Six of this year’s honorees are from the Miami, Fort Lauderdale, Jacksonville, and Tallahassee markets and three are from Puerto Rico.  This year’s in-person ceremony will take place on Sunday, May 22, 2022, at the Westin Beach Resort & Spa in Fort Lauderdale. If you’d like to attend this very special event, click here. 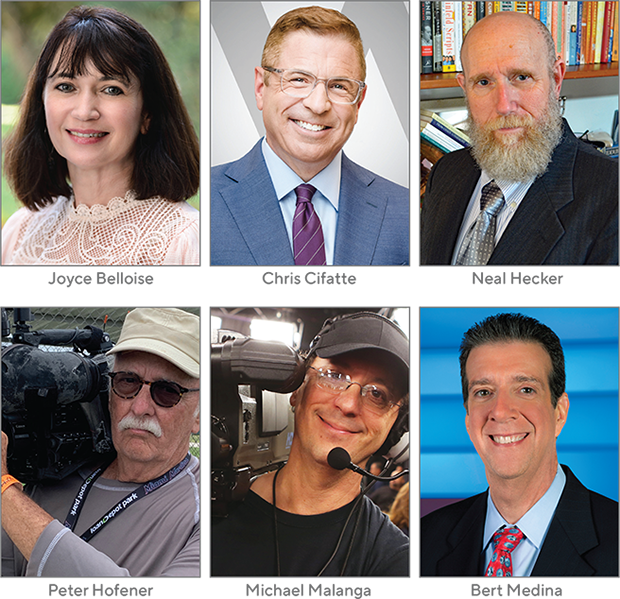 Joyce Belloise currently serves as Sr. Vice President of Content and Community Partnerships at South Florida PBS.  From compelling documentaries to innovative children’s programming and cutting-edge NextGen content, Joyce manages over a dozen South Florida PBS original productions. Over the years, Joyce’s work as a producer has garnered eight regional Emmy® Awards, six Telly Awards, three National Communicator Awards, and a Louis Wolfson Film & Television Award. Her documentary work focuses on history and culture, with such notable programs as Imagining a New Florida and the Emmy award-winning Buen Provecho! Florida’s Spanish Flavor. Passionate about the stories of her home state, the Miami native has produced a number of documentaries and television series over the years, from the weekly magazine program, New Florida … to the travel series Florida Roadtrip … to the popular restaurant review show, Check, Please! South Florida.

Emmy award-winner Chris Cifatte anchors WINK News at 5 and 6pm with Lois Thome, and WINK News at 11 with Amanda Hall. Chris has spent most of his career in Southwest Florida – joining WINK-TV in 2002. Here, he has covered and uncovered many big stories ranging from hurricanes Charley, Wilma (anchoring for 24 hours straight), and Irma, to a year-long investigation into FEMA underpaying victims of Hurricane Charley for their flood damage. Several families were paid-in-full after those stories aired. That series was used at a White House briefing as part of testimony on behalf of the victims. He was the first Southwest Florida TV reporter or anchor to broadcast live from Cuba. Chris has also covered five different Presidents and candidates on local visits or campaign stops. He is an adjunct faculty member at FGCU and works individually with many of the reporters and producers at WINK. Chris was also Lee County’s Big Brother of the Year in 2006 in the Big Brother/Big Sister program.

Neal has 40 years of experience in Broadcasting and Cable with over 35 years working in public television in both programming and production. He began his career in 1979 scheduling UPTOWN, a regional movie channel for Group W cable in Northern Manhattan. In 1986 he started in public broadcasting at WNYC-TV in New York City and moved to South Florida in 1998, where he was hired by WPBT as its Program Manager. Neal served on the board of the Public Television Programmers Association (PTPA) and was a programming representative to PBS’s Development Advisory Committee (DAC). He is currently on the American Public Television’s (APT) Premium Service Advisory Board and has been a member of the Fort Lauderdale International Film Festival (FLIFF) board from 2009-2014. Neal has written and produced multiple award-winning programs and series for WPBT, including the multiple Emmy-award winning art series, Art Loft, now celebrating its 10th anniversary. As a producer, he was honored with an ACE award, multiple Suncoast Emmys, and a CLIO nomination. After a 16-year tenure in South Florida, Neal joined The Programming Service in 2014, based in Tampa, Florida, where he serves as Senior Vice President.

Having covered more than 650 Miami Dolphins games, 300 University of Miami football games, and countless other sporting events, Peter Hofener has been a constant and familiar presence in the local sports community for nearly four decades while working for WSVN-TV. With stops along the way in Fort Myers and Birmingham, Alabama, Peter has covered legendary and hall of fame coaches like Bear Bryant, Don Shula, Gene Bartow, Jimmy Johnson, Pat Riley, and superstar athletes like Bo Jackson, Charles Barkley, Dan Marino, Shaquille O’Neal, LeBron James, Dwyane Wade, Jason Taylor, and Zach Thomas. He’s covered over 15 Super Bowls, five NBA Finals, three Kentucky Derbies, two World Series, a Stanley Cup Final, and several college football national title games. But above all else, Peter is most proud of the sports department’s coverage of high school sports and the timeless relationships he has developed over the years within the community. He was awarded a Regional Emmy for his coverage of the Chicago Bears-Miami Dolphins game on Monday Night Football in 1985. He considers it all a blessing and a heck of a ride.

When Michael Malanga was just 10 years old, his uncle gave him a tour of NBC in New York City, where his uncle worked. Immediately, Michael knew that this was the career for him. Michael’s first job, while still in high school, was an internship as a photojournalist for a group of weekly newspapers. He graduated from FIU with a full scholarship and interned at WTVJ. After WTVJ, he worked for Storer Communications in the production department. His dream had always been to work as a photojournalist for local television news. Surpassing those goals, he began working for a national, nightly newscast. At PBS’s Nightly Business Report, he became the Senior Photojournalist/Editor. Over his 26 years at NBR, he became the person to go to for creatively shot, lit, and edited feature stories and specials. When NBR was sold to CNBC in March 2013, he became a full-time freelance operator, specializing in handheld camera for unscripted entertainment shows and national award shows. He has worked on the Spanish editions of “The Voice,” “Dancing with the Stars,” and “MasterChef”, in addition to many other national productions. His camera, lighting, and editing work have won several awards, including two Suncoast Emmy nominations, and one Suncoast Emmy win.

Bert is President & CEO of WPLG, INC., which operates the ABC, MeTV, and H&I affiliates.  Medina became President of WPLG, INC., in July of 2014.  Medina is also CEO of Miami Tower LLC.  Previously, Medina held a variety of executive management positions during his 13-year tenure with Univision and prior to that, his 14 years with Sunbeam Television Corporation. In 2014 Medina became a member of the WPLG Board of Directors. He is also on the Board of Directors for Florida Association of Broadcasters, Kopenhaver Center for the Advancement of Women in Communication, the Marfan Foundation, where he serves as Secretary, National Association of Broadcasters, Emma Bowen Foundation Advisory Board, and Seneca Park Association Board, where he is Secretary and Treasurer. Medina served on the Board of Governors for the ABC Television Affiliates Association from 2015 through 2020. Previously, Medina has served on the boards of the Museum of Science and Industry in Chicago, the Illinois State Broadcasters Association, and the Board of Trustees of Columbia College. He has also served on the boards of the South Florida Chapter of the National Academy of Television Arts and Sciences and the American Marketing Association. Medina received his Bachelor of Science in Communications from Florida International University.